Federico Faggin, the science of consciousness

He made an important contribution to humanity by developing the first microprocessors and simplifying computer architecture. He invented the touchscreen and now, through the Federico and Elvia Faggin Foundation, he studies the nature of consciousness.

Federico Faggin, Italian physicist, inventor and entrepreneur, was born in Vicenza on December 1, 1941. He graduated in physics summa cum laude in 1965 at the University of Padova. Since 1968 Faggin resides in the United States.
At Intel he was responsible for developing various microprocessors, some still in use today. He develops MOS technology with silicon gate, which allows the first microprocessors and EPROM and RAM memories to be manufactured. They are essential for the digitization of information.
In 1986 Faggin co-founded and directed Synaptics, which developed the first touchpads and touchscreens.
On October 19, 2010 Faggin receives from President Barack Obama the National Medal for Technology and Innovation for the invention of the microprocessor.
In 2011 he founded the Federico and Elvia Faggin Foundation, dedicated to the scientific study of consciousness through the sponsorship of theoretical and experimental research programs at US universities and research institutes.

We meet Federico and Elvia Faggin in Piazza dei Signori in Vicenza. The background of the Palladian Basilica could not be more fitting. The harmony of shapes, the regular intervals of arches and openings, the span of variable widths, create a whole that is more powerful than a sum of parts. Faggin’s career is also a sum of parts, the result of teamwork that the Vicenza physicist directed with the natural virtue of a leader. Thus  Intel 4004 was born, the first microprocessor in the history of computer science, which has a harmony of its own. Integrated circuits create a pattern, a play of light and shadow, and the placement of each piece manifests in the whole function. The parts, by working together, create something powerful.

In 1986 he founded Synaptics, with the aim of developing computers capable of self-learning through structures of neural networks. An intuition that anticipated today’s research by 30 years. As a physicist, he had learned that there is only an objective world made of matter, energy, space and time. “If consciousness is a property of the brain, I said to myself, I should be able to make a computer that is aware,” he says with the intense gaze of a man who will never cease to investigate. “I had a very valid scientific committee of neuroscientists and I asked them: “What is the difference between awareness and the brain?” And they answered “clearly awareness is a phenomenon of the brain”.

Faggin is determined to understand and undertakes a long, passionate journey. He compares and harmonizes his educated scientific mind with intuition and his inner dialogue with the phenomenology of the external world. An indivisible whole like the union with Elvia, his wife and life partner.

In 1992 comes another invention that will change the way we interface with technologies. The touchpad. “It came from something inconsequential,” he says. “A small inconvenience. I was on the board of directors of Logitech – they made trackballs, and I had one of the first laptops with a trackball and I constantly had to open it and clean it because the oil from my hands lubricated the ball and it no longer worked. At that time I had a small research group and launched a proposal to look for an alternative to trackballs with solid-state electronics. In a couple of months, we invented the touchpad which replaced the trackball and the touchscreen, for which there was no platform yet.”

Will Faggin revolutionize the world of science the way he did with computing? “My goal is to understand, not revolutionize”, he replies with humble firmness. “After years of investigation, I experienced an episode that turned my prospects upside down. It was 1990. I was almost 50 years old and I had a spontaneous experience, not induced and very short, in which I felt I was both the world and the observer of the world. An event which was alien to the ordinary ones where we feel separated from others. Something profound changed in me. I realized that the only way was to explore my awareness firsthand. I don’t know if you’re aware, nor do you know if I am. We cannot prove it scientifically and this is part of the problem.” Faggin relies on a transpersonal psychologist, not to remove traumas but to understand the process and expose himself to new ideas. He studies, deepens, lives other experiences. “After that first time, I had so many, in response to what I was looking for. And it continues to be so. I have a dream and I wake up with an idea. I know I’m guided. How could it be otherwise? There is no way you can get there alone. We are guided. “

He sells his latest company, Foveon, which produces sensors for image acquisition to the Japanese. He leaves numerous boards of directors and in 2009 understands that, to have an impact, research on awareness must be funded. He knows good people who can’t find funds. The premise is that awareness is only a function of the brain. So, in 2011, the Federico and Elvia Faggin Foundation was born.

“Federico was the one who put my name on the Foundation. I have no role in originating ideas but I am always close to them,” Elvia says enthusiastically. “He works continuously with thought and imagination and when he wakes up at night with ideas, I wake up with him and talk about it. In this sense I am very involved.”

Federico: “My wife is an integral part of my journey and declaring her by my side in this new adventure represents the essence of our union.”

Elvia: “Space and time are two obsessions of Federico and during nocturnal conversations he tries to understand how to fit the pieces of the puzzle into his philosophical-scientific model.”

Federico: “It is beautiful because our Yin Yang dynamic reflects the polarities at the origin of life itself. Who knows why everything that is phenomenological must be an expression of a truth instead of being open. We need to combine the intuitive, feminine, with the rational, masculine. Science and spirituality must find a harmony that does not exist today. They are two separate fields that coexist but do not recognize each other, and it is time to stop, otherwise we reduce our humanity to a machine on the one hand, and on the other, we cultivate a sense of superiority. This dualism causes fundamentalism and dystopia. Let’s go further to understand how the nature of reality works.”

His is another way of seeing. He explains: “I cannot directly observe your inner world, I must try to understand it by interpreting symbols: your words, how you behave, your entire physical appearance. Awareness, however, which exists before space – time, perceives the entirety of the other, not only the symbols but all the fields by which it is created. It sees them together, simultaneously. We are the other and we are ourselves. It is that kind of contradiction that exists in quantum physics. The qbit is both zero and one. True and false. This apparent contradiction comes from the fact that reality, even before the universe, is holistic. There is no distinguishable part. In holism of classical physics, parts are separable and identifiable. In quantum mechanics we speak of holism where there are identifiable parts that cannot be called parts. I call them whole parts, units of awareness. Each has its identifiable yet inseparable identity. If the parts were not identifiable there would be no self. In my model, the symbolic aspect is irreducible from the semantic one, and I call it nus which means “mind” in Greek. That becomes nusym, a new name to indicate something from which everything emerges: space, time, matter and energy. Two indivisible aspects, matter and spirit. Like the two sides of a coin, the external one we see and the inner one, which is the inner experience of that coin.”

If you wondered what happened to the conscious computer, after years of studies, Faggin came to the conclusion that it is impossible to design: “how do I translate what I feel into electrical or biochemical signals, and vice versa. We perceive reality within us through sensations and feelings, emotions and thoughts. That has nothing to do with electrical signals,” he concludes.

The computer to be explored is within us. 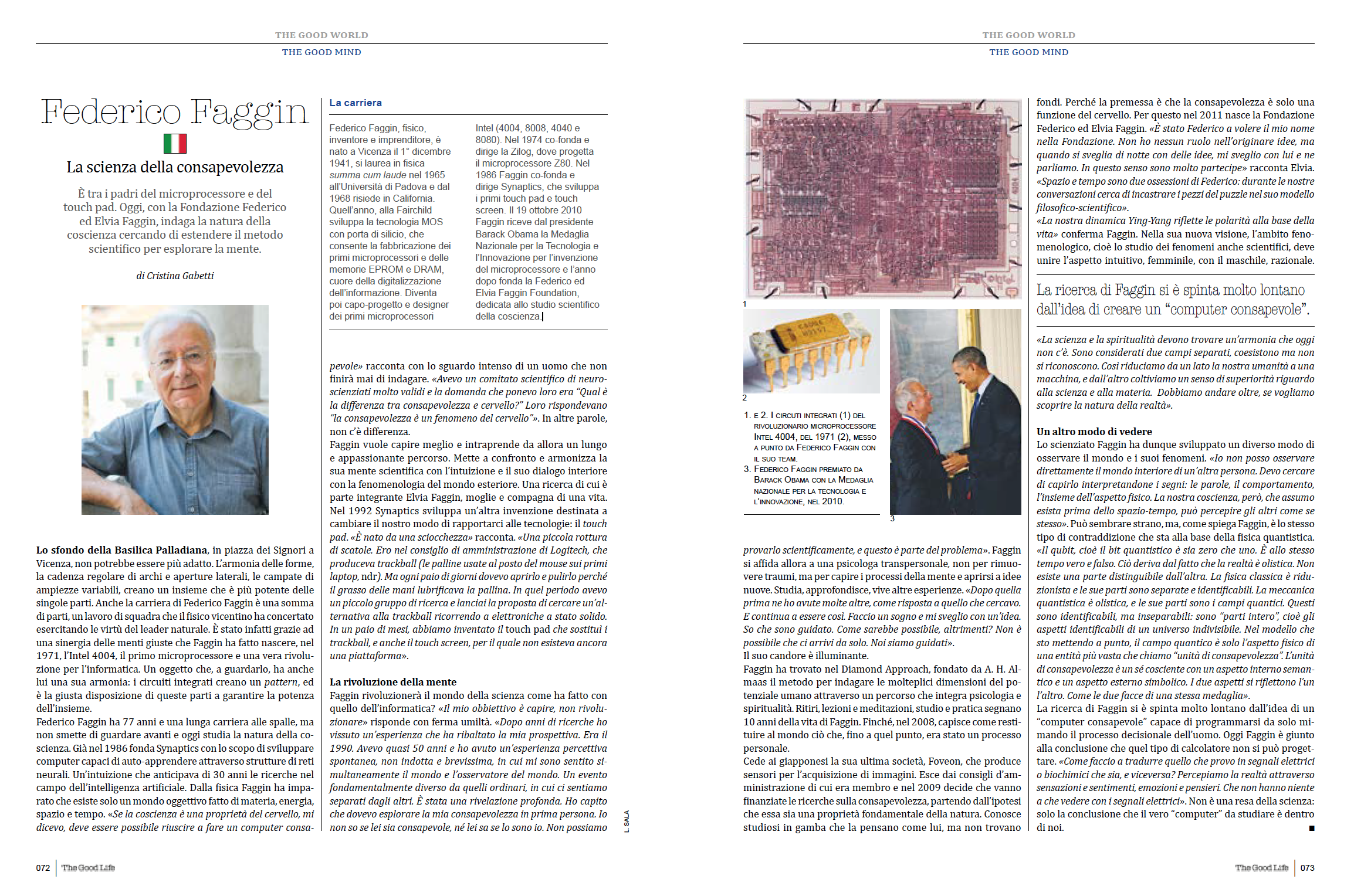